Somehow we know about time. We have some kind of image of time that informs us about it. This image of time may be fixed or it may change over time. If the time-image changes over time, it does so because time throws successive frames of us into existence with different time-images. When I remember that I recited Psalm 53 yesterday, this memory is an image of an earlier now. I also expect that I will recite Psalm 55 tomorrow. Without these time-images I would be locked in a present without a past or future; a present in which I have no knowledge or experience of time.1

By itself, the presence of memories and expectations is not enough to give us an image of time. If we are not aware that we are expecting or remembering, then our expectation or remembrance is not a time-image. When I daydream about tomorrow or vividly re-enact a previous experience, I am in some sense actually in the future or past. In this case the future or past become present and lose their character of futurity or pastness. It is only when I come back to myself in the present that I realize I have been experiencing a fantasy or memory and not the real present. A true time-image is a combination of present and past, present and future, or past, present and future. I have to have some awareness that I am remembering at the same time as I am remembering; I have to be conscious of my situation in the present to intentionally direct myself towards an image of the past or future. If I am not rooted in the present, I cease to remember the past and start to re-live it instead.

A simple model of the time-image is offered by Augustine:

Suppose that I am going to recite a psalm that I know. Before I begin, my faculty of expectation is engaged by the whole of it. But once I have begun, as much of the psalm as I have removed from the province of expectation and relegated to the past now engages my memory, and the scope of the action which I am performing is divided between the two faculties of memory and expectation, the one looking back to the part which I have already recited, the other looking forward to the part which I have still to recite. But my faculty of attention is present all the while, and through it passes what was the future in the process of becoming the past. As the process continues, the province of memory is extended in proportion as that of expectation is reduced, until the whole of my expectation is absorbed. This happens when I have finished my recitation and it has passed into the province of memory.
What is true of the whole psalm is also true of the parts and of each syllable. It is true of any longer action in which I may be engaged and of which the recitation of the psalm may only be a small part. It is true of a man's whole life, of which all his actions are parts. It is true of the whole history of mankind, of which each man's life is a part.3 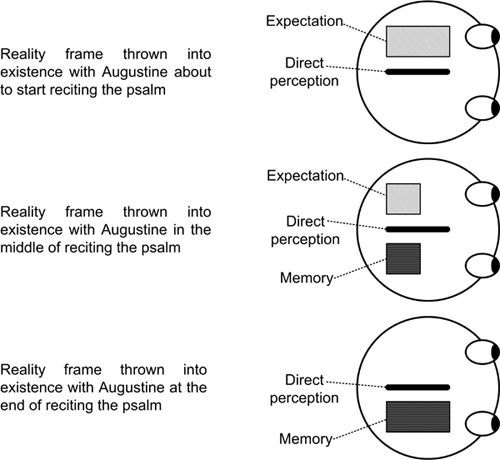 The location of past time-images within the brain is well documented. Both implicit and explicit memories are correlated with activation in the basal ganglia, hippocampus, amygdale, entorhinal cortex, parahippocampal cortex and the perirhinal cortex.5 These areas may be the location of the time images, but it is more likely that they are needed to activate time images in other areas of the brain, such as the visual cortex. What is clear is that when these areas are damaged, the time images are damaged as well. For example, after a brain infection, patient Boswell's present of the past became extremely limited. When he recites a psalm he is unable to describe even the main points of the text that he has just read.6